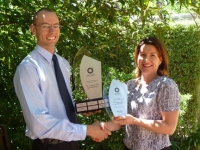 The directors of Boyce Chartered Accountants are proud to announce Brian Wray as the winner of the firm’s prestigious “Tony Quirk Employee of the Year” award for 2014.

The judging panel, which this year included the firm’s managing director Bernard Kennedy, HR manager Gabrielle McFarland and the 2013 joint employee of the year award winners, Danae Vitnell and Ben Calder, selected Brian as the stand-out from this year’s five finalists for his outstanding work as the firm’s senior tax specialist.

“We were thrilled that in this, the seventh year of the TQ Award, the calibre of the finalists was once again outstanding – a reflection of the depth of talent we have in the firm,” said Boyce HR manager Gabrielle McFarland.

The judging criteria includes demonstrating a genuine care for clients, contributing to the social fabric of the firm, acting in a professional manner, living the firm’s values on a daily basis and meeting the high performance expectations of the role within Boyce.

Managing director, Bernard Kennedy, acknowledged Brian as a very deserving recipient of the 2014 TQ Employee of the Year award.

“Brian’s role with the firm is enormously challenging and requires a huge amount of intellect and skill; something Brian (who is also sometimes known as “Brain”) has in spades,” Bernard said.

“The work Brian does often involves significant pressure and can be time sensitive, all of which he handles calmly and diligently.”

Brian commenced with Boyce as a cadet in 2000. He completed a Commerce degree at the Australian National University followed by his professional year as he moved quickly through the accounting ranks to become the firm’s senior tax specialist.

“Brian demonstrates care for clients, both internal and external, on a daily basis by going to great lengths in his quest to find and deliver timely solutions to complex tax problems,” said Boyce Goulburn director, Carmen Caldwell.

“Brian’s work has resulted in many, many outstanding outcomes for our clients; he strives to identify solutions that tick all the boxes by assisting our clients to legally optimise their tax outcomes.”

Ms Caldwell says that Brian definitely passes the ‘good bloke test’; he cares for and thinks about others, both clients of the firm and his work colleagues.

The Boyce directors are heartened to see the extremely high calibre of nominees and finalists being recognised annually by their peers through the TQ Award process, reinforcing the philosophy of excellence that is central to Boyce.

The firm’s managing director acknowledged the achievements and contribution of the four other finalists from across the Boyce offices:

Mr Kennedy said that all of the finalists had contributed immensely to the ongoing success of the firm.

Pictured above; Brian Wray, winner of the 2014 TQ Employee of the Year award with Carmen Caldwell, director of Boyce Goulburn.