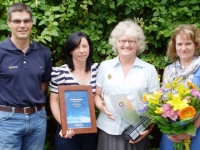 The Managing Director of Boyce Chartered Accountants, Bernard Kennedy, recently announced Elizabeth Timmins as the winner of the firm’s employee of the year award for 2011. Elizabeth was selected by the judging panel as a stand-out winner of the award in recognition of her extraordinary contribution to the firm over more than 17 years.

The employee of the year award was initiated by the firm’s leadership group in 2008 to honour fellow Director and friend, the late Tony Quirk. Tony joined Boyce in 1991 and went on to become the youngest-ever Director appointed in the firm. Tragically he died prematurely at the age of 34.

“The judging panel was thrilled that in this, the fourth year of the TQ Award, the calibre of the finalists was once again outstanding,” said Ms McFarland.

The criteria for judging includes demonstrating a genuine care for clients, contributing to the social fabric of the firm, acting in a professional manner, living the firm’s values on a daily basis and meeting the high performance expectations of the role within Boyce.

Ms McFarland cited Elizabeth’s impressive technical expertise in a complicated area such as superannuation and the effort and care she takes to achieve the best outcomes for clients as just two of the characteristics that contributed to Elizabeth winning the award in 2011.

“Not only is Elizabeth an amazing contributor in terms of expertise and client work, she is a great team member and always a positive ambassador for Boyce,” said Ms McFarland.

Boyce Cooma Director, Kathy Kelly, said Elizabeth has made an outstanding contribution to the firm and is highly regarded by her colleagues and peers in the industry.

“Elizabeth shares her knowledge and expertise selflessly and displays a passion for her work that inspires those around her,” said Ms Kelly.

It has been a big year for Elizabeth who earlier in the year was awarded the “Best Practice Award 2011” by the SMSF Professionals’ Association of Australia (SPAA). This award acknowledges members who demonstrate ‘best practice’ self-managed superannuation fund (SMSF) advice whilst also promoting the professionalism of the association and industry generally. Elizabeth was recognised for her consummate technical and strategic knowledge, and her ability to explain the legislation in a “plain English” manner.

Elizabeth accepted the TQ Employee of the Year Award at a special morning tea held in the Boyce Cooma office. She typically acknowledged the support of her fellow team members as well as remembering Tony Quirk in whose memory the award was initiated.

“It is great to have this award to remember what a top bloke Tony was,” said Elizabeth.

The Directors of Boyce also acknowledged the achievements of the finalists from the other Boyce offices – Sarah Pye (Dubbo), Jono Hart (Goulburn), Hannah Keady (Moree) and Grant Goldsworthy (Wagga Wagga).