The directors of Boyce are proud to announce Ben Calder of Dubbo and Danae Vitnell of Goulburn as dual award winners in the firm’s highly prestigious “Tony Quirk Employee of the Year” award for 2013.

The judging panel, which included Boyce independent chairman Robyn Clubb and HR manager Gabrielle McFarland, was unable to separate the two eventual winners noting that both Ben and Danae met all the criteria and characteristics to be judged as worthy winners.

The employee award was initiated by the firm’s leadership group in 2008 to honour fellow Director and friend, the late Tony Quirk.  Tony joined Boyce in 1991 and became the youngest-ever Director appointed in the firm and was well on the way to forging an outstanding public accounting career before he tragically died at the age of 34.

Tony Quirk’s memory lives on at Boyce through this highly coveted award. Finalists from each of the Boyce offices are selected by their peers to be judged against criteria that encapsulate Tony’s contribution to the firm such as demonstrating a genuine care for clients, contributing to the social fabric of Boyce, acting in a professional manner, living the firm’s values on a daily basis and meeting the high performance expectations of the role within Boyce.

Managing director, Bernard Kennedy, paid tribute to the two winners saying it was fitting that the judging panel, in an unprecedented decision, awarded the title this year to both Ben and Danae.

“These two outstanding accountants have made a huge contribution to the firm and are highly regarded and respected not just by the directors, but indeed by their peers and our clients,” Bernard said. 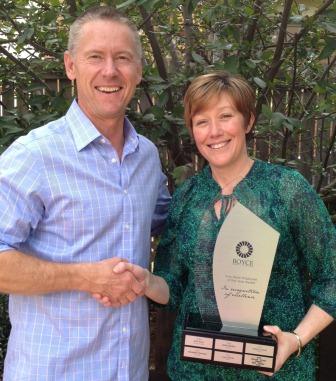 “Danae and Ben are the embodiment of the saying ‘leading by example’ – they set themselves extremely high standards but are mindful to bring others in their teams along with them to ensure an outstanding level of service to clients.”

Danae Vitnell (pictured at right with Bernard Kennedy) joined Boyce Goulburn in 2000 and works alongside director, Peter King, to manage a large client base and three team members.

Peter said in his 26 years with the firm he has worked with some outstanding people focused on client service but singles Danae out as the best ever in terms of caring for her clients.

“Danae has not only mastered the art of finishing the hard jobs but her natural, unaffected communication style allows her to put people quickly at ease - both of which are great skills to have when our business is all about people and problem solving.”

Danae is the epitome of professionalism and Peter commends her ability to balance a demanding career with a deep commitment to family.

“Danae works extremely hard but she hasn’t lost her sense of fun – she is an integral part of the Boyce Goulburn team and we are all proud that her significant contribution has been recognised with this award.”

Ben Calder, the dual winner of the award in 2013 (pictured at right with Bernard Kennedy), is a senior manager in the Dubbo office of Boyce.  He works closely alongside the firm’s managing director, Bernard Kennedy.

Bernard nominates a high-level of technical ability, strong work ethic and cool temperament as the three qualities he most values about Ben.

“When Ben joined Boyce in 2008 I thought he might be a good accountant, but it turns out he is a great accountant.” 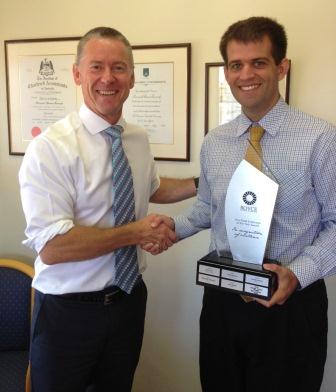 “Ben just naturally gets accounting plus he gets what Boyce is about – his level of care for clients, his innate technical ability and determination to solve problems makes for some very happy clients.”

Bernard goes as far to say that Ben is the best accountant he has ever worked with.

“Ben is the complete package – he combines a strong intellect with a friendly approachable manner that makes him the ‘go to person’ around the office, and the word has spread beyond Dubbo with many of the wider Boyce team now seeking his input."

All of these people have contributed in different ways to the success of the firm and for that we are extremely thankful they are part of the Boyce family.