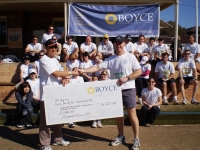 “It is pleasing that this challenge is also able to deliver benefits that far outlast the day of the event and that their fundraising, on behalf of the Cure For Life Foundation, will enable us to continue our efforts into finding a cure for brain cancer so that one day patients may be told that they have a manageable condition.”

The Managing Director of Boyce, Bernard Kennedy (pictured at right presenting a cheque to Dr Teo) said that the firm had recently established a corporate social responsibility program which was being driven from within by the firm’s employees.

“The Boyce team take their responsibilities in the community seriously and are committed to making a difference in many ways, across many different areas.” said Mr Kennedy.

“They again elected Dr Teo’s Foundation in 2010, as one of two major causes to support.”

Mr Kennedy said that it was extra special for the team to have Charlie Teo running alongside them in a Boyce t-shirt.

“It kept us focused on the reason why we were putting ourselves through the pain,” he said.

The firm’s fund-raising efforts started well before the actual event with clients, professional colleagues, family members and friends, all encouraged to join in the fun.

“Even if people didn’t want to enter the race, they were encouraged to contribute by making donations and offering messages of support for the participants.”

It obviously worked because the Boyce Team managed to raise more than $16,000 this year alone and finish in the “top 10” fund-raising teams alongside Steve Waugh’s “Team Waugh” and a team fielded by the Commonwealth Bank.

“Not a bad result for a team from the bush”, said Mr Kennedy.

For more information about The Cure For Life Foundation visit www.cureforlife.org.au.