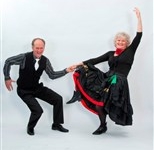 Boyce Superannuation Strategist, Elizabeth Timmins, not content with the daily challenge of negotiating the superannuation maze, has been honing her dancing skills to participate in the annual “Dancing with the Cooma Stars” competition to raise money for cancer research.

The Monaro Committee for Cancer Research (MCCR) invited eleven Cooma identities to be 'stars'
in the 2012 competition and teamed each up with a professional partner from the Monaro dance schools and beyond. The 'stars' challenge is to raise as much money as possible culminating in a gala dinner and show over two nights on the 25 and 26 May 2012.

The MCCR was formed by the daughter of a young Monaro mother who died in 1996 after a 5 year battle with cancer. Inspired by her mother’s courage and spirit, she was determined to do something to help. As well as raising funds to further cancer research, MCCR provides funds to enable local support and treatment for cancer patients living in the Snowy Mountains and Monaro area. It is so much easier for patients and families when treatment does not involve long periods away in a city and/or frequent long distance travel.

The Monaro oncology service is a pilot for other regions and its success will hopefully see similar services established in other regional areas where there is strong community support. MCCR is a not for profit organisation that to date has raised in excess of $550,000 for this and other projects.
Elizabeth and her dance partner Mark, are vying for one of two trophies in the “Dancing with the Cooma Stars” competition – one for the best dancing couple and the other for the couple who raises the most in donations.

Elizabeth says to win the dancing prize is a big ask (she has two left feet) but is she is hoping to do a good job with the fundraising.

To read more about Elizabeth’s dancing journey and to donate visit the website at http://dancingwiththecoomastars2012.gofundraise.com.au/page/TimminsL  or forward a cheque to Elizabeth at PO Box 56, Cooma 2630. Donations close 23 May 2012. Your support will be received most gratefully.