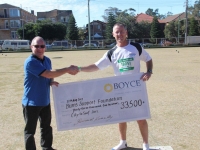 Last year the “Boyce Bites” cookbook was a big winner with supporters. This year one of the more entrepreneurial activities came from the Moree office of the firm where the directors and staff auctioned on eBay a dinner party for ten guests. Local celebratory chef, Toby Osmond, was engaged to help plan an ambitious menu for the dinner.

Of course there have also been many of the more usual fundraising activities such as cupcake stalls, lolly-guessing jars and dress-up days.

The Wagga team members looked great dressed in Hawaiian shirts last week – which may seem a bit radical for a group of accountants, but as you are all aware, Boyce is not your typical accounting firm.

Of course we have a special motivation to raise as much money as we can to help the Burns Support Foundation continue their fantastic work. Julie Schofield, a director of the firm and the Boyce City2Surf team captain, suffered a burns injury as a child.

Julie, with the help of the Burns Support Foundation, was able to cope with the many years of hospital visits and surgeries to emerge with a positive attitude to life and a rewarding career. It is to help the foundation to carry on their great work that so inspired all the Boyce team in this year's fundraising effort.

Julie was overwhelmed with the efforts of the Boyce team, all the supporters and everyone who donated to the cause.

“It means so much to my family and to me to know that other kids will now be able to receive the assistance and support from the Burns Support Foundation that I received as a child,” she said.

Despite the recent birth of her second child, Julie competed in the event alongside her colleagues and managed to finish in a very respectable time.

Bernard has now put out a challenge to our colleagues in the larger metro-based accounting and legal firms to match the Boyce fundraising efforts in the City2Surf next year – we’ll keep you posted.