Boyce Director Sings Up a Storm 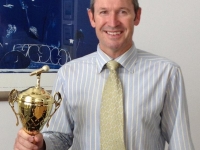 Boyce Wagga Director, Simon Sellars, revealed a hidden talent when he competed in the recent “Wagga Wagga It Takes Two” charity concert held over three nights from 24 to 26 April.

Simon and his singing partner, Lauren Carlson, wowed the audiences with a quintessential medley rendition of three classic hits from the legendary Australian rock group INXS - “Need you tonight”, “What you need” and “New Sensation”.

Simon donned his best 1980’s gear and rocked some moves in what was an impressive impersonation of Michael Hutchence.  The audience obviously agreed as Simon and Lauren received the People’s Choice Award at the Friday evening show.

This talented duo raised more than $24,000 for the Amie St Clair Melanoma Trust and were presented with a trophy as the runner-up highest fundraisers in this year's event. Overall almost $180,000 was collected for local charities.

The money raised by Simon and Lauren will be used by the Trust to provide more support to local melanoma sufferers and their carers by increasing the hours of the Melanoma Care Nurse to three days per week.

The Amie St Clair Melanoma Trust is dedicated to raising awareness of melanoma. The trust actively supports medical research and endeavours to provide better access to specialised care for the communities of the Wagga Wagga region.  Amie was only 20 years old when she was diagnosed with metastatic melanoma.  In August 2007 she discovered a lump in her groin.  She was prompt in seeking medical advice, and after an ultrasound and biopsy, was diagnosed with melanoma. There was no primary skin lesion ever found.

Over the next couple of years this unpredictable cancer appeared again and again.   Amie went through numerous operations but it had spread too quickly - the surgeons could not operate as fast as it appeared.  She battled long and hard for just over three years, trying every available treatment.  On 9 November 2009, just one day after her 23rd birthday, Amie lost her battle with cancer.

For many people illness is a very private matter but Amie’s journey was well-documented in local media and her progress followed by the Wagga Wagga community.  It had always been her wish that others learn from her story and not have to face the same fate at the hands of melanoma.  The Amie St Clair Melanoma Trust has been created in her honour to educate and support Riverina families with regards to melanoma prevention and education.  It was also recognised during Amie’s illness that there are limited resources and support for melanoma patients in rural areas.  The Trust seeks to address this by providing support for other families fighting melanoma.

Boyce Wagga Wagga Director, Linda Mackellar, is a Director of the Trust.

If you would like to find out more or make a donation please visit http://www.amiestclairmelanoma.org.au/