“I am extremely proud we were able to raise - what is for our firm - a record amount to donate to this very worthy community service. I would like to thank all our clients, colleagues and friends who helped us to make this year's fund-raiser so successful.”

The fund raising efforts of the Boyce team didn’t just focus on the race. Each of the firm’s five offices around the State held fund-raising events in the months and weeks leading up to the event. 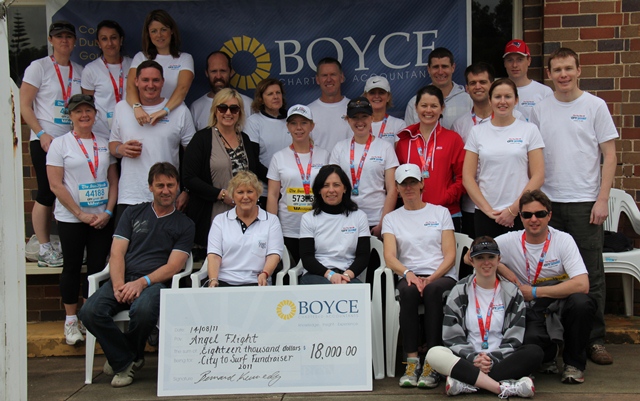 “From the “Angel Cup-Cake” stall, to the “guess the number of lollies in the jar” competition and the Boyce charity barbeque, just about everyone did their bit to contribute,” Bernard said.
Patricia Clarke, a volunteer with Angel Flight, was on hand at the finish of the race to meet the Boyce team and gratefully accept the donation.

Director of Angel Flight, Terry McGowan, later communicated his thanks on behalf of the organisation.

“To raise more than $18,000 is an immense effort and one which Angel Flight is proud to have been the recipient of - the support shown by Boyce is sincerely appreciated,” said Mr McGowan.

The Boyce team didn’t disappoint in terms of race results either with two of the team completing the gruelling 14 kilometre course in just outside of an hour.

The participants and supporters enjoyed the traditional post-race “warm-down” event funded by the firm, which included lots of rehydrating drinks.

“We’ll be back again next year – the fund-raising aspect of this event is central to the firm’s philosophy of contributing to our local communities and as a bonus, it helps us focus on our fitness," said Bernard.