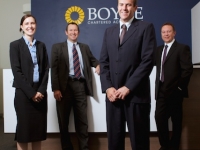 Boyce is celebrating not one, but two milestone anniversaries this year. It is 40 years since the firm was first established in 1973 by the legendary Michael Boyce and ten years since it ‘set up shop’ in Wagga Wagga.

The firm’s proud history of rural practice began in the Monaro region of New South Wales with the establishment of an office in Cooma in July 1973. Today Boyce has five offices located in major regional centres across NSW and a staff of more than 140 – making it the largest independent accounting practice in regional Australia.

The Wagga Wagga branch of the firm was opened on 31 March 2003 under the leadership of director Simon Sellars.

“We leased the historic ANZ bank building on the corner of Fitzmaurice and Johnston Streets and opened for business in a city which we believed offered fantastic opportunities for us to meet the region’s growing need for management accounting services,” Simon said.

He admits that the timing may not have been ideal as much of the State was in the middle of one of the longest droughts in more than 100 years.

“We accepted the challenge though, and looking back it seems to have paid dividends as the farmers and local businesses really needed the type of accounting services we were offering to help them remain viable and come through what were for many, desperate times.”

The type of services Simon is referring to are more than just the normal compliance accounting services. Boyce specialises in providing management accounting and business advisory services to assist clients to closely monitor the performance of their business and understand their true financial position.

“Our approach ensures that our clients know at any time how their business is travelling and can make strategic and insightful business decisions around this information.”

Initially many of the firm’s clients were farmers and agribusinesses, but over the past ten years this has expanded to now include retail and wholesale businesses, professional firms, construction and medical services. In pure numbers the business has achieved a compounded growth rate of 10% per annum since 1 July 2004. Gradual consistent growth is important as it allows the firm to develop its most important asset - its people - whilst delivering first class service to its existing and new clients.

Soon after establishment of the Wagga Wagga office, Simon was joined by former Moree colleague  Linda Mackellar. Linda quickly became an integral part of the Boyce Wagga Wagga leadership team and was appointed as a director of the firm in July 2007 at the age of just 28 years.

In October 2008, signalling a firm commitment to the city and to the Riverina, Boyce purchased the graceful 120 year old building from which it operates in Wagga Wagga.

“It is part of the culture and philosophy of the firm that we invest in the towns in which we do business,” explained Linda.

“We are very proud to own such a significant building and it is our intention to continue to respect the integrity of the structure and ensure that it is well maintained so that it can serve as an office building for another 120 years at least.”

Linda likened this guardianship attitude to the building to the general philosophy of the firm, a philosophy that is very much focussed toward care for clients. In their ten years in the region, the Boyce team has built an enduring reputation for combining knowledge, insight and experience with personalised country service.

Boyce was ranked in the Top 40 of the BRW 2012 Survey of Accounting Firms and is recognised as offering a level of professionalism that many would expect to find only in the larger metropolitan-based firms.

“As directors we, and our team, live and work in the region, so we are very intent on ensuring we help to keep the local business community strong,” Linda said.

“We are also very aware of our role in the general community so as a firm and individually we are involved in many different aspects of life in Wagga Wagga and the surrounding areas.”

Due to its scale, Boyce offers specialist divisions of knowledge to assist and advise clients in areas such as family reorganisations, benchmarking, business planning, superannuation strategy advice and compliance, estate planning and complex tax advice.

In 2008 the firm established a financial advisory division, the head-office of which is located in Wagga Wagga.

Director of Boyce Financial Services, Lindsay Garnock, admitted that again the timing was not great as the global financial crisis hit at precisely the time this new business was launched
.
Despite this Lindsay says the business has gone from strength to strength. He attributes this to a business model that from the very start offered clients “fee for service” rather than the commission based models used by many in the industry at that time.

“We were at the forefront in terms of reforms being implemented in the industry – the requirement to act inherently in the best interest of the client is a value that underpins our business.”

The Boyce directors are rightly proud of a firm with such a long history, and extraordinarily pleased with the growth and development of the Wagga Wagga branch.

“We have a great team of people, we work with some of the best businesses in the country, we live in one of the most beautiful inland cities in Australia in a diverse and thriving region,” said Simon.

“We couldn’t ask for anything more.”