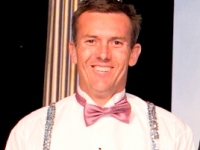 The Boyce Financial Services (BFS) team was honoured to be nominated as one of five finalists in the prestigious “Lonsdale Associate of the Year” award at the 2013 Lonsdale & IOOF Alliances National Conference held in Perth.

BFS won the “Lonsdale Associate of the Year” award in 2011 and has previously been nominated as a finalist twice before in 2010 and 2012.

The award recognises the success of a financial planning practice based on a number of key business drivers including revenue growth, positive compliance audit ratings, continual knowledge improvement through participation at forums and professional development days, and alignment to the values and strategy of the Lonsdale network.

Mark Stephen, CEO of Lonsdale Financial Group said “Boyce Financial Services have been a loyal part of the Lonsdale network for over 5 years. We have quite a number of high performing practices so for Boyce to have been both a finalist and a winner over the past four years is a testament to the quality business they’ve built.”

The Lonsdale Financial Group supports a network of more than 120 financial planning practices and 300 financial advisers from across Australia.

Lindsay Garnock (pictured above), a director of Boyce Financial Services (BFS), said despite missing out on the winner’s gong this year – which was awarded to a financial planning firm based in the mining and port city of Mackay – he was very proud that the commitment and care shown by the BFS team to balance client needs with best practice industry compliance, was again recognised through the finalist placing.

“To be named as one of the top five firms in the Lonsdale network for the fourth year in a row is very pleasing,” said Lindsay.

“We don’t aim to win awards though, but rather to provide the highest level of service and care for our clients to ensure they meet their financial goals – if we win an award by doing that, well that’s fantastic too.”