Many business owners spend time examining the drivers of their business success such as the return on investment, turnover and profit margin, but have you ever thought about benchmarking your human capital?

Understanding how your business performs as an employer of choice is critical if you wish to attract and retain great staff.

An employee survey provides an opportunity for staff members to have input into their workplace and can highlight factors that may be crucial in determining whether you have an engaged or disengaged team.

So what is the best indicator of an engaged workforce?

The 2012 Great Place to Work (GPTW) survey conducted by the Great Place to Work Institute, an international company that has provided more than 30 years of research to this field of study, determined that trust was at the crux of how well your team will feel engaged to your business (as illustrated in the figure below). 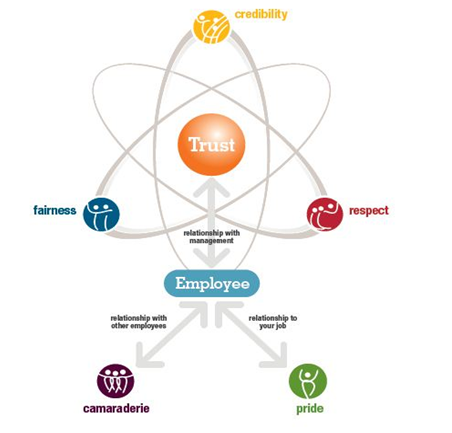 The survey was open to companies with 35 or more full-time or part-time employees, including public or private companies, multinational branch offices, non-profit organisations, associations and government bodies.

Boyce has participated in the GPTW employee survey for the past two years. We see this as a key strategy to understand where we can improve in areas that are important to our staff.

In the second year of being involved, Boyce was ranked 52 out of 291 participants - just outside the top 50 (as published in BRW June 2012).

This result is a testament to the Directors’ commitment to continually review the drivers around employee engagement, a practice that was established in the formative years of Boyce, and one that has continued with the current leadership group. It is part of the cultural philosophy of the firm to value and recognise the contribution of all members of the team.

As part of the 2012 GPTW survey, employees were asked to complete a trust index survey in which they responded to 58 statements and answered two opened-ended questions, designed to measure the levels of trust, pride and camaraderie within the workplace.

Two-thirds of a company’s total score was derived from employee responses to this survey. The other third was based on management’s responses to a “culture audit”, in which the business owners and/or managers demonstrate their intent to create and maintain a great workplace culture.

Three important metrics were measured by this audit:

Asking your team to provide honest feedback is a leap of faith and a bit risky, but you can’t make changes to improve and become an 'employer of choice' if you are unaware of the issues impacting your workforce. The rewards for asking and getting input can make huge differences to your staff morale, turnover and productivity -  if you get it right.

It’s no surprise that most of the world’s most successful businesses use employee surveys to benchmark their human capital. But just asking the questions doesn’t go far enough. The true benefits come when employee feedback is translated into meaningful action.