Market volatility has persisted as markets are continuously adjusting for the impact of inflation and the subsequent effect on interest rates and economic growth. We believe that this market volatility will persist until there is evidence that inflation has peaked and bond yields have stabilised.

With interest rates rising, there has been increased attention on the risk of recession. The risk of recession has increased as central banks tread the fine line between trying to curb inflation and trying not to strangle economic growth. To date, economic growth remains positive, but some of the cyclical indicators are softening, indicating that the global economy is slowing.

The main issue for the central banks is that monetary policy is a very blunt tool and while raising rates will most certainly curb demand, it will do little to address the supply side issues global economies are facing. A good example is China, where the hard stance on Covid lockdowns have essentially brought Chinese ports to a standstill. Additionally, the war in Ukraine has driven commodity prices up including crude oil and agricultural products such as wheat, fertilizer and canola oil. Ukraine and Russia combined contribute 12% of the world’s total calories and are key suppliers of grains to Africa and the middle east.

Therefore, whether we head into a recession will be dependent on the two key factors of easing of supply chain issues and central banks not overplaying their cards by raising rates too high. At this stage, our base case for Australia is that we will avoid a recession and if we do go into recession, it will not be a deep recession. 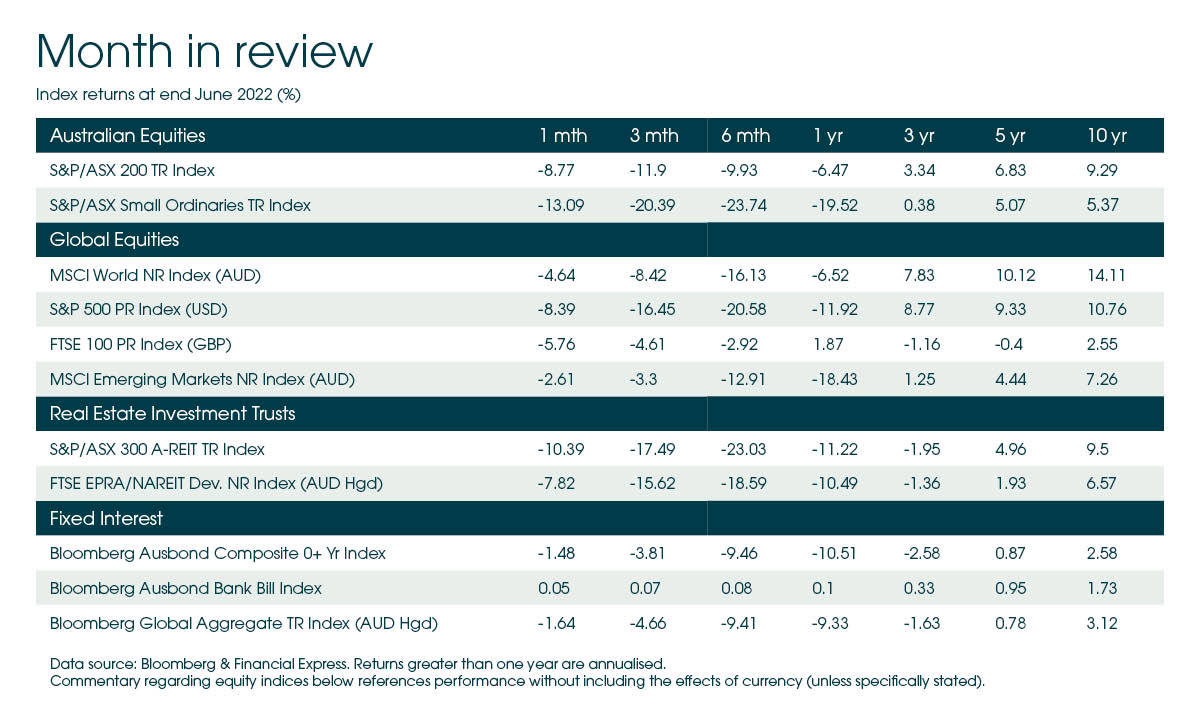 The Australian share market closed out the financial year with the S&P/ASX 200 falling sharply by -8.8% and ten out of eleven sectors finishing lower.  The Consumer Staples sector was the only positive finisher for the month (+0.2%). The Materials (-12.4%) and Financials ex-Property (-11.8%) sectors were the biggest laggards as recessionary fears weighed down risk assets across various sectors. Similarly, the Information Technology (-11.0%) sector’s poor year-to-date performance persisted.

The Consumer Discretionary sector finished lower as retail sales figures continued to surprise to the upside despite the increasing interest rate environment and pressure on consumers discretionary income. The accelerating sell-off in the Materials sector was driven by market participants weighing up the potential for recessionary risks given the tightening interest rate cycle and continued inflationary pressures. Likewise, similar sentiment around potentially subdued economic growth drove a sell-off in the Financials sector. Overall, the downtrend equities persisted as investors mulled various negative economic headwinds and continued hawkishness from central banks.

The first half of the year concluded with another challenging month in June as inflation and recession fears continue to erode investor risk sentiment worldwide. Developed markets sharply fell by -4.6% by month end, Global small caps followed the lead of their large cap counterparts closing with a more pronounced -6.1% decline. Emerging and Asian markets performed somewhat better than their developed market peers, but nonetheless still fell by -2.6% and -1.8% by month end.

As recession fears heighten and inflation pressure heats up around the globe, central banks continue to be challenged by their now delicate mandate of interest rate settings.

Australian Fixed Income markets have delivered another month of poor returns in June, as the Reserve Bank of Australia continues to tighten monetary policy, raising the cash rate by 50bps in both their June and July meetings to a total of 1.35% at present. Despite this, yields remained fairly stable at the short end of the curve with such increases having already been priced in, however yields continued to increase at the 10-year level by approximately 18bps, resulting in a steepening of the yield curve.

Internationally the story remains similar, as central banks continue raising rates in an effort to contain inflation. This can be seen in the US Federal Reserve, which raised the federal funds rate by 75bps in its June meeting, the first hike of such a magnitude since 1994. However, fears of a recession have seen yields fall further out on the yield curve. Overall performance in global Fixed Income markets has been weak throughout June, as the rate increases at the short end of the curve have been more impactful.

Local and Global REITs continued to sell off during June. Domestically the A-REIT index (represented by the S&P/ASX 200 A-REIT Accumulation Index) ended the month –10.3% lower, providing the worst monthly performance since March of 2020.

The index has returned –23.5% on a total return basis YTD to 30 June. Global REITS slightly outperformed the local REIT index, albeit still experiencing a significant drawdown of –7.6% during the month. Despite poor performance, globally the all Equity REITs index (-6.4%) remains ahead of the Total Stock Market Index (-10.7%) since the Russia and Ukraine conflict. Domestically, infrastructure (represented by the S&P/ASX Infrastructure Index) has turned negative this month, returning –3.2% in June and 13.1% YTD.