The only eligibility criteria for the contributor are that they are 65 or older and they have not previously made a downsizer contribution from another property sale. Unlike other super contributions, the contributor does not need to meet the work test or have a total super balance of less than $1.6 million. This means you could be eligible even if you’re retired, over 75 or have more than $1.6 million in super.

Government-backed, low-interest loans from the Regional Investment Corporation (RIC) have been doubled from up to $1 million per eligible farm business, to a new ceiling of $2 million.

The federal government launched the Orange-based RIC on 1 July 2018 to replace state agencies’ loan schemes. Its purpose is to deliver farm investment loans and drought loans to help farm businesses prepare for, manage or recover from the effects of drought.

How do the loans work?

The RIC’s two loan products offer a 10-year term with interest-only repayments for the first five, a variable interest rate of 3.58 percent and no fees. The frequency of repayments, and how much principal must be repaid in the second half of the loan before it is refinanced with a commercial lender, is tailored to each business.

The Drought Loan can be used for farm-related activities including refinancing debt, funding drought related activities, enhancing productivity, or paying for operating expenses and capital improvements.

December is a prime time for virus, malware (malicious software) and phishing emails because people are busy and it's easy to get distracted. While there are gifts to be purchased, food to be prepared and parties to be attended, we recommend that you remain vigilant with emails to ensure your computers and data are protected.

Here are some things to remember: 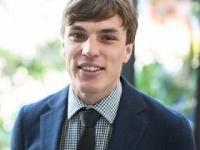 Australia’s top regional accounting firm Boyce Chartered Accountants has announced the appointment of Iain Elliott (pictured second from right) to Director at its Cooma office, just seven years after he started with the firm as a graduate.

Having grown up in Cooma, Iain joined Boyce as a Graduate Accountant in January 2011 after completing his studies through the Australian National University in Canberra.

We are seeing an increase in sophisticated phone scammers posing as the Australian Taxation Office (ATO) or as a registered tax agent to scare taxpayers into paying funds. These scammers are threatening legal action and arrest if amounts are not paid.

A number of our clients as well as our staff have received phone calls or messages on their voice mail from a person claiming to be from the ATO saying that they will be indicted for fraud or will go to prison if they don’t pay an amount to cover a tax debt. The scammers are using technology to make it look like calls are coming from a legitimate ATO number or accounting firm.  The number may appear on caller ID and be left on messages for a call back.