2016-17 Federal Budget | A national plan for jobs and growth 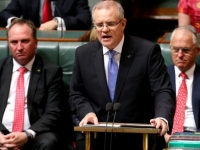 Last night the Federal Treasurer, the Hon. Scott Morrison MP, delivered his first and the Coalition Government’s third budget and in contrast to the last budget there weren’t too many surprises this year. From a superannuation point of view, the budget contained some significant changes. However, despite there being some complexity to the proposed changes there is a large element of fairness being applied. The announcements also include measures that impact individual income tax, small business and corporate taxation.

Following is a summary of the main taxation related announcements that if enacted are likely to impact on individual or small and medium enterprise taxpayers.

Superannuation was front and center in this year’s budget with the Government announcing numerous tax reforms to improve the sustainability, flexibility and integrity of the superannuation system.

It is really important that you seek advice from your accountant prior to making a pension withdrawal and/or a superannuation contribution.

The changes announced are forecast to add $2.9 billion to the budget's bottom line over four years. These changes include:

From 1 July 2017, individuals will be allowed to make additional concessional contributions where they have not reached their concessional contributions cap in previous years. Access to these unused cap amounts will be limited to those individuals with a superannuation balance less than $500,000. Amounts are carried forward on a rolling basis for a period of five consecutive years, and only unused amounts accrued from 1 July 2017 can be carried forward.

From 1 July 2017 the 10 per cent rule will be removed. This means all individuals up to age 75 will be able to claim a tax deduction for personal superannuation contributions regardless of their employment circumstances.

Currently, those aged 65 to 74 must be gainfully employed for at least 40 hours in 30 consecutive days within a financial year to make any contributions to their superannuation fund. From 1 July 2017, it is proposed to remove this work test. This means, anyone under the age of 75 will be able to make a superannuation contribution subject to the relevant contribution limits.

From 1 July 2017 a $1.6 million cap is proposed to apply to the amount of accumulated superannuation benefits that can be transferred to the pension phase. Subsequent earnings on the amount transferred to a pension will not be restricted. It is also proposed that existing pension accounts that have a balance above the cap will need to be reduced to $1.6 million by 1 July 2017. For example, by moving funds back to the accumulation phase. Amounts transferred in excess of the cap will be subject to tax, similar to that which applies to excess non-concessional contributions.

Earnings from income supporting a TRIS

From 1 July 2017 the tax exemption on earnings of assets supporting Transition to Retirement Income will be removed meaning the general 15 per cent superannuation rate on earnings will be applied. It will also remove a rule that allows individuals to treat certain superannuation income stream payments as lump sums for tax purposes.

The current spouse superannuation tax offset will be available to more people when the spouse income threshold changes on 1 July 2017. The threshold will increase from $10,800 to $37,000.

From 1 July 2017 the anti-detriment provisions in respect of death benefits from superannuation will be removed.

Following on from last year’s budget the Treasurer announced from 1 July 2016 the small business entity turnover threshold will be increased from $2 million to $10 million.

Please note the current $2 million threshold will continue to apply in determining access to the small business capital gains tax concessions (the $6 million net asset test will also be retained for this purpose). In addition, access to the unincorporated small business tax discount will be limited to entities with a turnover less than $5 million.

In effect, the new $10 million threshold will apply to tax measures including:

From 1 July 2017, all small businesses with less than $10 million turnover will more easily be able to classify transactions and prepare and lodge their business activity statements. A trial of the new simpler reporting arrangements will commence on 1 July 2016.

The pause in the indexation of the income thresholds for the Medicare levy surcharge and the private health insurance rebate will continue for a further three years.

Reducing the company tax rate to 25 per cent

There will be a reduction in the company tax rate to 25 per cent over 10 years.

In the 2024-25 income year the company tax rate will be reduced to 27 per cent and then be reduced progressively by one percentage point per year until it reaches 25 per cent in the 2026-27 income year. Franking credits will be able to be distributed in line with the rate of tax paid by the company making the distribution.

Amendments to Division 7A

Changes will be made to Division 7A to provide clearer rules for taxpayers and assist in easing their compliance burden while maintaining the overall integrity and policy intent of Division 7A. It includes a self-correction mechanism for inadvertent breaches of Division 7A, appropriate safe-harbour rules to provide certainty, simplified Division 7A loan arrangements and a number of technical adjustments to improve the operation of Division 7A and provide increased certainty for taxpayers.

Overseas suppliers that have an Australian turnover of $75,000 or more will be required to register for, collect and remit GST for low value goods supplied to consumers in Australia, using a vendor registration model.

$678.9m will be spent to establish a Tax Avoidance Taskforce. This will enable the ATO to undertake enhanced compliance activities targeting multinationals, large public and private groups and high wealth individuals.

The holding period will be reduced from three years to 12 months for investors to access the 10 year capital gains tax exemption, the definition for eligible start-ups will include a time limit on incorporation and whether a start-up is an innovation company, require that the investor an innovation company are non-affiliates and limit the investment amount for non-sophisticated investors to $50,000 or less per income year in order to receive a tax offset.

From 1 July 2017 the current brewery refund scheme will be extended to domestic distilleries and producers of low strength fermented beverages (but not to alcopops producers).

From 1 July 2016 the transfer pricing laws will be updated to align with the 2015 OECD recommendations (currently Australia’s TP laws were last updated in line with the OECD 2010 recommendations).

Tobacco excise and excise-equivalent customs duties will be subject to four annual increases of 12.5 per cent from 2017 until 2020. The increases will take place on 1 September each year and will be in addition to existing indexation to average weekly ordinary time earnings.

If you have specific questions about how the 2016-17 budget may impact you or your business, please speak with your local Boyce accountant.