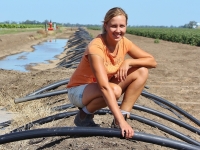 The aim of the study is to collect and critically analyse data that will assist the industry to grow and develop sustainably through a focus on best practice techniques. The total number of bales in the 2012 study was just over 550,000 – representing approximately 11% of total cotton production in Australia.

The report reveals that it wasn’t all bad news for cotton growers, as profits for both the ‘average’ and ‘top 20%’ were close to historically high levels, although nowhere near the 2011 record results.

“The difference in yield between the top 20% and the average grower, of around 1.7 bales per hectare, is telling,” said Paul.

A comparison of five year averages reveals that the top 20% of growers made 130% more profit than the average, returning $1,687 per hectare compared to $732 per hectare.

The difference, according to the report, can be largely attributed to better land productivity measured by higher yields. The message to farmers is to concentrate on growing higher yields rather than searching for dramatic cost-cutting measures.

“Using this year as an example, our view is that growers should weigh up the cost / benefit of strategies such as revising the height of levies or improving their ability to get water off the field at a faster rate,” said Paul.

Expenses per hectare were higher than in 2011 even though it was a very light insect year and contract picking costs fell. There were however alarming increases in fertiliser costs, contract farming and other farm overheads.

The increase in cotton wrap is solid confirmation of the up-take of new picking technology by the industry according to Mr Fisher. He cautions however, that whilst the benefits of round bale technology might seem obvious, the cost outcome may well be different for individual growers and should be closely analysed.

The report notes that many land-holders have achieved large increases in net assets over the past five years due to increasing land and water values, rather than through the accumulation of profits.

“Our view is that it is likely that the capital growth of water and land has slowed in the established cotton-growing valleys which will lead to a renewed focus on profits,” said Paul.

“This will hopefully result in growers seeking to identify and implement changes to their businesses as they strive to achieve results to match the top 20% in the industry, as we all know a healthy cotton farm cannot survive on capital growth alone.”

The 2012 Australian Cotton Comparative Analysis can be downloaded here or for more information contact Paul Fisher at Boyce Moree on 02 6752 7799.